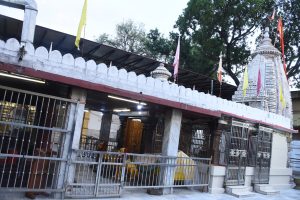 Welcome to one of the most religiously-celebrated, architecturally superb and culturally rich temple of south-east India: Shri Mahamaya Devi Mandir, Ratanpur. From many decades since, the temple and the town of Ratanpur have attracted the attention of scores of historians and archaeologists.Surrounded by lush green hills and housing more than 150 ponds, the town is flocked – twice a year – by hundreds of thousands of devotees every year, who visit here in Navrataras to get darshan of the awe-inspiring dual-statue of their beloved goddess: Mahamaya Devi. 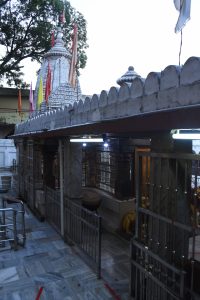 Situated at 25 km away from the city of Bilaspur (Chhattisgarh) on the Bilaspur-Ambikapur state highway, the Mandir and the relics of scores of ancilliary temples, domes, palaces and forts – now rundown by the time and natural forces – seem to tell a story. Once the capital of the Kalchuri kings, Ratanpur – then, Ratnapur – has almost a millenium of history.

Built on the Nagar school of architecture, the temple is surrounded by a 18 inch thick boundary wall. Supported by sixteen stone columns, the temple is believed to be built around 12th century AD. Many of the statues and motifs used in the temple have been taken from rundown or broken temples of earlier centuries, some of them were Jain temples. The main campus of temple has the smaller statues of Mahakali, Bhadrakali, Surya Dev, Lord Vishnu, Lord Hanuman, Bhairav and Lord Shiva. It is believed that the first puja and abhihek of Devi was performed at 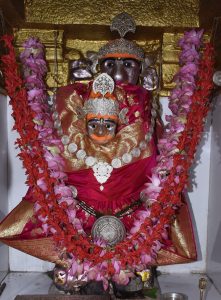 this place by Kalinga king Ratna Dev in 1050 AD, when he shifted his capital from tuman to Ratnapur. Because of its strategic geographical status, King Ratna Dev and his heirs made Ratnapur their capital and built up palaces, fort and temples, the remnants of which can be seen still today.

Dual statue of Maa Mahamaya     Inside the main temple campus, facing the famous Kanthi Dewal temple and the Temple main pond is the splendid dual statues of Mahamaya: the front one is called the Mahishasur Mardini and the hind statue is believed to be that of Goddess Saraswati. However, by a casual viewer the rear statue can often be overlooked. In the Navratras, devotees come from all corners of the country and the world to get a glimpse of the celebrated Devi and pay their rituals. Surrounding the main temple are many big halls where Jyoti Kalashas are lit by the Trust on behalf of the devotees. The Kalashas are kept “alive” for the whole nine days of Navratras. This is why they are also called Akhand Manookaamna Navratra Jyoti Kalashas. It is believed that Devi fulfills all your wishes if you follow proper fasting, puja and archana of Devi and also contribute to the Akhand Jyoti Kalashas. 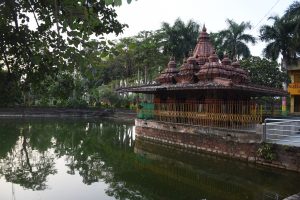 It is also believed that if you make a wish before it, after performing proper puja and hang a shriphal (coconut) wrapped in red cloth on the tree before it, your wish is granted by Him.

The Kanthi Dewal temple is octagonal in shape and believed to be of Hindu and Moghul school of architecture. Made of red stone, all its walls are decorated by sculptures of 9th to 12th century. The important sculptures are : Shaal Bhanjika, a Lady feeding a child, Lingodhbhava Shiva and a Kalchuri king. Inside the Kanthi Dewal temple is a Shiv Lingam, the phallus, which, in Hindu dharma, is believed to be the source of Divine Energy. It is believed that if Lingam is poured with milk and water after proper puja-archana, it is sure to give the devotee the mental and physical strength and energy. A little known fact about this temple is that it was reconstituted recently by the Department of Archeological Survey of India. The reconstitution spanned five years, but the actual shape of the temple was kept intact.

Online Donation : In SBI online collect, donation can be made using ‘Any Bank’ ATM/Debit.Credit card/internet Banking.

In SBI online collect, donation can
be made using ‘Any Bank’ ATM/Debit.
Credit card/internet Banking.